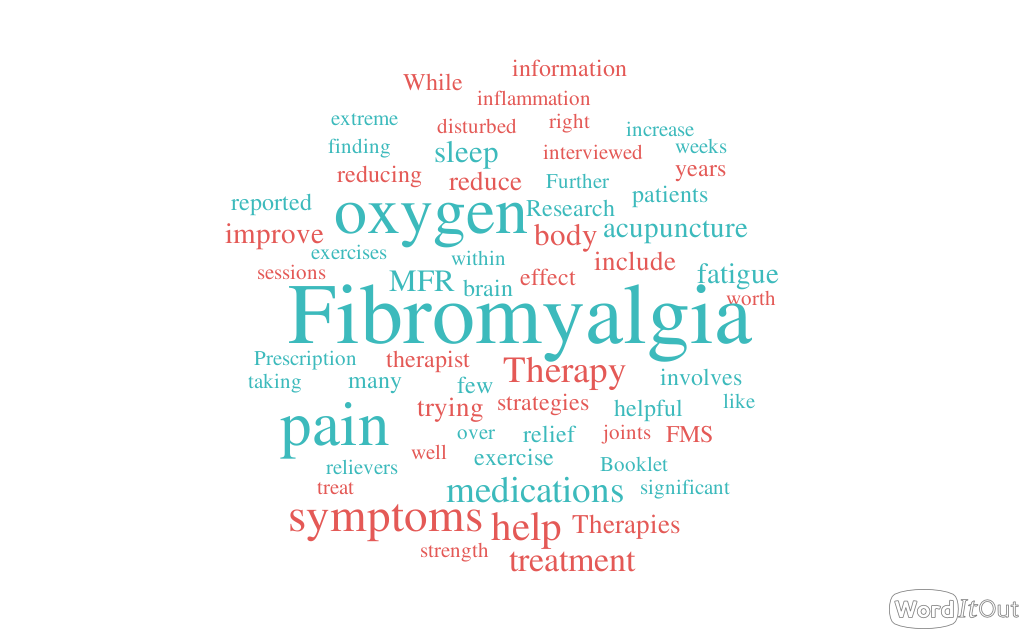 What is Fibromyalgia? How can we help?

Fibromyalgia Syndrome (FMS) is a neurological disorder that involves the brain’s communication with pain receptors via the spinal cord. It is like the part of the brain that perceives pain is “turned up,” causing even mild stimulus, such as light touch, to register as painful.

Fibromyalgia affects primarily women, ages 40-60, though some men, young adults, and teenagers may be affected as well.  Symptoms include widespread pain and extreme sensitivity to touch, in addition to fatigue, disturbed sleep patterns, impaired memory and the ability to focus.

The pain of Fibromyalgia comes and goes, often moves throughout the body, and is unrelated to inflammation or 'wear and tear'. It is for this reason that FMS patients gain little relief from traditional drug therapies.

In a study conducted by the Mayo Foundation, 39 FMS patients were interviewed about their symptoms and average 6-12 prescription medications. Ten years later, 29 of these patients were interviewed again. While 55% reported severe pain and stiffness, 48% reported disturbed sleep, and 59% reported persistent, extreme fatigue, an overwhelming 79% were still taking the same or similar medications.

Prescription medications can, over time, deplete the body of essential nutrients, the ramifications of which may take years to manifest, as well as the sleep hormone melatonin, which further contributes to disrupted sleep patterns. It is widely recognised that that the majority of prescribed medications come with side-effects, many of which mimic the symptoms they are meant to relieve, such as fatigue, pain, brain fog.

What treatments are available?

In general, treatments for fibromyalgia include both medication and self-care strategies. The emphasis is on minimizing symptoms and improving general health. No one treatment works for all symptoms but trying a variety of treatment strategies can have a cumulative effect.

A few studies suggest that low B12 levels may be involved in fibromyalgia and ME/chronic fatigue syndrome. Research on B12 supplements for these illness has  begun, A 2015 study of B12 injections showed a positive response, especially in those who were also taking daily folic acid supplements.

Medications can help reduce the pain of fibromyalgia and improve sleep. Common choices may include:

Over-the-counter pain relievers may be helpful. Opioid medications are not recommended, because they can lead to significant side effects and dependence and will worsen the pain over time.

Duloxetine (Cymbalta) and milnacipran (Savella) may help ease the pain and fatigue associated with fibromyalgia. Your doctor may prescribe amitriptyline or the muscle relaxant cyclobenzaprine to help promote sleep.

A variety of different therapies can help reduce the effect that fibromyalgia has on your body and your life. Examples include:

A physiotherapist can teach you exercises that will improve your strength, flexibility and stamina. Gentle low-impact exercise, such as yoga, Pilates and Tai Chi can help maintain bone mass, improve balance, reduce stress, and increase strength. Getting regular exercise can also help control your weight, which is important to reducing the pain of fibromyalgia. Moving your body may be the last thing you feel like doing, but you have to believe that it really does help. It’s hard at first, but it does get easier. Water-based exercises may also be particularly helpful.

An occupational therapist can help you make adjustments to your work area or the way you perform certain tasks that will cause less stress on your body.

Talking with a counsellor can help strengthen your belief in your abilities and teach you strategies for dealing with stressful situations. Mediation and Mindfulness can also be effective.

Appears to modestly reduce many types of chronic pain, so it's not surprising that many people with fibromyalgia are interested in trying it. While the studies on the effectiveness of acupuncture for fibromyalgia symptoms are somewhat mixed, most suggest that it may have a beneficial role.

Fibromyalgia can be difficult to treat, and a combination of treatments may be necessary to control your symptoms. If you're having trouble finding relief for your fibromyalgia pain, it may be worth trying acupuncture. But if your symptoms don't begin to improve within a few weeks, acupuncture may not be the right treatment for you.

This is a hands-on treatment performed on the skin with no oils or creams. By following the unique lines of tension in each patient’s body, the MFR therapist can reach deeply into the tissues and uncover significant restrictions.

MFR involves applying gentle, sustained pressure into these connective tissue restrictions to eliminate pain and restore motion. By going slowly and waiting for the body’s natural rhythm, the fascia responds by elongating, rehydrating, and reorganizing. If you're having trouble finding relief for your fibromyalgia pain, it may be worth trying MFR. But if your symptoms don't begin to improve within a few weeks, MFR may not be the right treatment for you.

This is an effective, and safe means of treating and managing the various symptoms of Fibromyalgia. Oxygen therapy is an intermittent inhalation of 98% oxygen in a barochamber chamber at a pressure higher than, up to two-times, normal atmosphere.