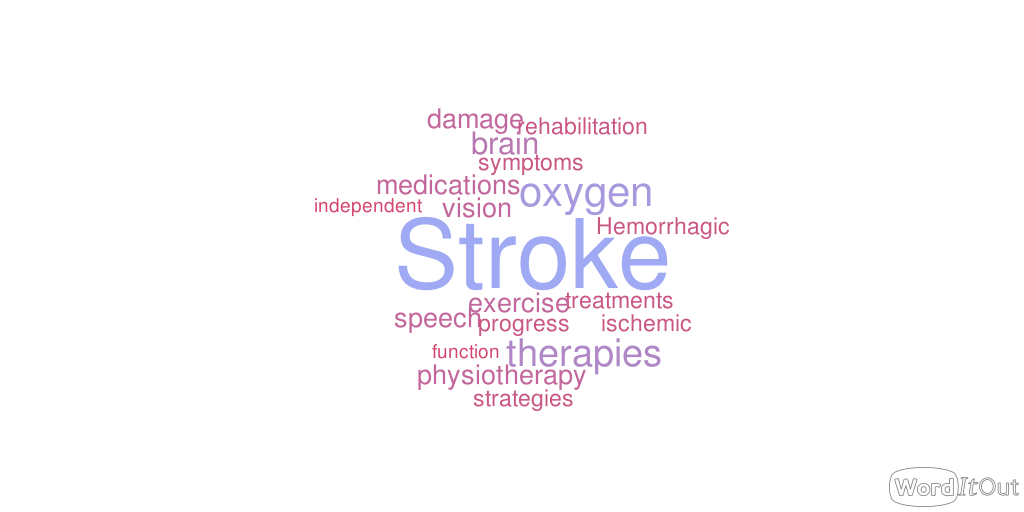 What is a Stroke? What help is available?

A stroke occurs when a blood vessel in the brain ruptures and bleeds, or when there’s a blockage in the blood supply to the brain. The rupture or blockage prevents blood and oxygen from reaching the brain’s tissues.


The cause of a stroke depends on the type of stroke. The three main types of Stroke are: transient ischemic attack (TIA), ischemic stroke, and haemorrhagic stroke.

Several medications are used to treat strokes. The type your doctor prescribes depends largely on the type of stroke you had. The goal of some medications is to prevent a second stroke, while others aim to prevent a stroke from happening in the first place.

The most common stroke medications include:

This emergency medication can be provided during a stroke to break up a blood clot causing the stroke. It’s the only medication currently available that can do this, but it must be given within 3 to 4.5 hours after symptoms of a stroke begin. This drug is injected into a blood vessel so the medication can start to work as quickly as possible, which reduces the risk of complications from the stroke.


These drugs reduce your blood’s ability to clot. The most common anticoagulant is warfarin (Jantoven, Coumadin). These drugs can also prevent existing blood clots from growing larger, which is why they may be prescribed to prevent a stroke, or after an ischemic stroke or TIA has occurred.
These medications prevent blood clots by making it more difficult for the blood’s platelets to stick together. The most common antiplatelet drugs include aspirin and clopidogrel (Plavix). They can be used to prevent ischemic strokes and are especially important in preventing secondary stroke. If you’ve never had a stroke before, you should only use aspirin as a preventive medication if you have a high risk of atherosclerotic cardiovascular disease (e.g., heart attack and stroke) and a low risk of bleeding.
Statins, which help lower high blood cholesterol levels, are among the most commonly prescribed. These drugs prevent the production of an enzyme that can turn cholesterol into plaque — the thick, sticky substance that can build up on the walls of arteries and cause strokes and heart attacks. Common statins include rosuvastatin (Crestor), simvastatin (Zocor), and atorvastatin (Lipitor).
High blood pressure can cause pieces of plaque build-up in your arteries to break off. These pieces can block arteries, causing a stroke. As a result, controlling high blood pressure can help prevent a stroke.

Specialises in treating disabilities related to motor and sensory impairments. They help restore physical functioning by evaluating and treating problems with movement, balance, and coordination. A physical therapy program may include exercises to strengthen muscles, improve coordination, and regain range of motion; and constraint-induced therapy, in which an unaffected limb is immobilized, causing the person to use the affected limb to regain movement and function.
Can help to improve motor and sensory abilities while ensuring safety in the post-stroke period. They can help you relearn skills needed for performing self-directed activities (also called occupations) such as personal grooming, preparing meals, and housecleaning.
Can help with mental and emotional health and assess cognitive skills.
Can help you relearn how to use language or develop alternative means of communication and improve the ability to swallow. They teach problem-solving and social skills needed to cope with the after effects of a stroke.
Can assist with making financial decisions and plan the return home or to a new living place. They also can help plan for care after being discharged from a rehabilitation facility.

as a treatment for ischemic stroke promotes the growth and development of tissue in the central nervous system, regulates cerebral blood flow in the ischemic area, and improves long-term memory after a stroke. Additionally, studies have found that acupuncture may have beneficial psychological effects on patients after they had a stroke, lowering the risk for depression.


is an ancient Chinese tradition that involves a series of slow movements and stretches coupled with deep breathing. The body and mind work together to perform coordinated movements by focusing on each posture as it flows to the next. Research shows that the practice can help stroke patients improve balance, too. who suffered from neurological disorders and found that tai chi was effective in reducing fall incidences in both Parkinson’s disease and stroke.


Oxygen Therapy can lead to significant improvement in brain function in post stroke patients even at chronically late stages, helping neurons strengthen and build new connections in damaged regions. Oxygen therapy works by improving blood flow to a stroke patient’s damaged brain tissues. The area of dead brain tissue resulting from a lack of blood supply is known as an infarct. The ability of a stroke victim to recover using hyperbaric oxygen depends on several factors: the infarct size and location and the condition of the penumbra (the area between dead tissues and the non-impacted brain). Severe brain infarctions cause swelling that also intensifies pressure on the remaining viable brain tissue.

Oxygen therapy floods blood plasma, lymph fluids and cerebrospinal fluid (the clear, watery fluid that fills the brain and spine) with pure oxygen at higher-than-normal atmospheric pressures. The body receives 1,500 to 2,000 times the O2 concentration it would when a person breathes in normal room air. This brings down brain swelling and provides crucial nutrients to oxygen-starved brain matter, muscle, and bone. In many cases, with a series of hyperbaric oxygen treatments, stroke victims’ function improves. Dormant cells in the penumbra become reactivated, and new capillaries also form in the area. These capillaries increase both blood flow and nutrients and carry away cellular waste.

is the manipulation of body tissues in order to enhance a person’s health and well-being. Studies have that Thai massage and herbal treatments can improve daily function, mood, sleep patterns, and pain in individuals who have suffered a stroke. Massages can help people who have had a stroke by relieving pain and improving sleep and mood.

Disclaimer: The information provided on this website is not intended to be a substitute for professional medical advice, diagnosis, or treatment.